“Run, I said to myself. Run until your lungs collapse, until the wind whips and snaps at your tattered clothes, until you're a blur that blends into the background. Run, Juliette, run faster, run until your bones break and your shins split and your muscles atrophy and your heart dies because it was always too big for your chest and it beat too fast for too long and run. Run run run until you can't hear their feet behind you. Run until they drop their fists and their shouts dissolve in the air. Run with your eyes open and your mouth shut and dam the river rushing up behind your eyes. Run, Juliette. Run until you drop dead. Make sure your heart stops before they ever reach you. Before they ever touch you. Run, I said.” ―Juliette's Notebook, Unravel Me

This wiki still needs a lot of improvement, and we would gladly appreciate it if you help us out! Think there's an article missing? Type in the title and start making one! 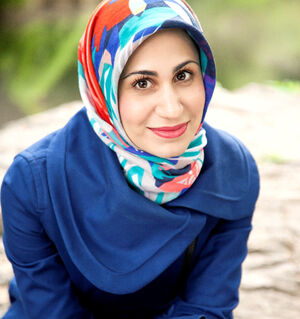 Tahereh Mafi is the author of the New York Times bestselling books Shatter Me and Unravel Me. She was born the youngest child with four older brothers in a small city somewhere in Connecticut, and currently resides in Orange County, California. She graduated from a tiny liberal arts college two miles from the shores of Laguna Beach, has varying levels of competency in eight different languages, and spent a semester abroad in Barcelona, Spain, where she had the opportunity to study Spanish literature in its native form.